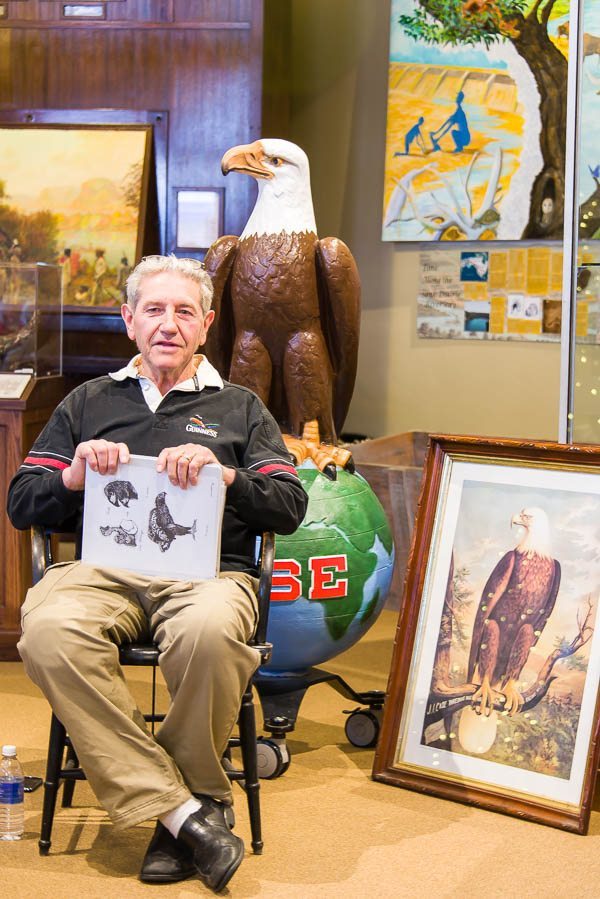 Frank LaCour of Crystal Lake, Wisconsin, along with his children and grandchildren, will recount their family’s story. He will also share the history of Old Abe, the Wisconsin Civil War Eagle on Saturday, January 14, 2017, 10 a.m. at the Tripp Heritage Museum 565 Water St, Praire du Sac, Wisconsin as one of the many free events happening during Bald Eagle Watching Days in Sauk Prairie, Wisconsin.

Frank LaCour is the great, great grandson of the Daniel McCann of Chippewa County, Wisconsin. Picture and article courtesy of https://www.army.mil/article/91178

In 1861, a Native American named Ahgamahwegezhig — or Chief Sky — a member of the Flambeau band of the Chippewa tribe, cut down a tree in an attempt to capture two American Bald Eaglets in their nest. Chief Sky later traded the surviving eaglet to Daniel McCann of Eagle Point, Wisc., for a bushel of corn.

McCann took the bird to Eau Claire, Wisc., and briefly kept it as a family pet. Caged inside a modified oaken cask, the bird grew larger and quickly became too expensive to feed. McCann actively sought to sell the as yet unnamed bird to the many units of Wisconsin troops passing through the area en route to their muster site at Camp Randall in Madison, Wisc.

After many unsuccessful attempts to rid himself of the bird, McCann eventually sold the Eagle for $2.50 to Capt. John E. Perkins, the commanding officer of a militia company, called the “Eau Claire Badgers.” Part of the money was, reluctantly, given by local tavern-keeper S.M. Jeffers.

In light of their newly acquired mascot, the unit renamed themselves the “Eau Claire Eagle.”

During its time awaiting muster into Federal service at Camp Randall, the 8th Wisconsin Volunteer Infantry Regiment purchased a special shield-shaped perch on which to carry their mascot. It was here, in Madison, Wisconsin where “Old Abe” named in honor of our 16th President, Abraham Lincoln.

The 8th Wisconsin Volunteer Infantry Regiment spent its entire military service in what was then known as the Western Theater of the American Civil War comprising: Missouri; Arkansas; Tennessee; Mississippi; Louisiana; and Alabama. “Old Abe” was present during all of the 8th Wisconsin’s battles and was carried into combat by a sergeant on a unique perch alongside the 8th Wisconsin’s National and Regimental colors.

Seeing “Old Abe” atop his perch during the battle of Corinth, Mississippi, Confederate General Sterling Price remarked, “that bird must be captured or killed at all hazards; I would rather get that eagle than capture a whole brigade or a dozen battle flags.”

During “Old Abe’s” service, the 8th Wisconsin participated in many battles, expeditions, and pursuits of Confederate forces. Among these were the battles of Iuka; Corinth; Island Number 10; Big Black; Champion’s Hill; the Red River and Meridian expeditions; and the Battle of Nashville. “Old Abe” was there every step of the way.

The 8th Wisconsin’s most famous fight came in June of 1863 when the regiment participated in a futile frontal assault along Vicksburg’s Graveyard Road. “Old Abe” and his regiment, then part of Mower’s Brigade, failed to penetrate the center of the Confederate fortifications near a 90-degree bend in the Confederate defensive positions known as Stockade Redan.

Their enlistments having expired, the men of the 8th Wisconsin mustered out of federal service in late-1864. The 8th Wisconsin Volunteer Infantry Regiment was no more. On Sept. 26th, 1864, a contingent of 70 8th Wisconsin veterans marched “Old Abe” to the state and presented him to Governor James Lewis. “Old Abe” was donated to the people of Wisconsin by the loving comrades alongside whom he had fought for four years.

In 1865 an enterprising Chicagoan, capitalizing on “Old Abe’s” fame, sought to enlist him in support of the United Sanitary Commission’s efforts to provide aid and comfort to wounded Veterans. Thus the “Army of the American Eagle” was formed. Children were “enlisted” to sell paper photographs of “Old Abe” in much the same way that schools raise funds today. Proceeds from the sale of these photos went to benefit local veteran’s charities.

“Old Abe” lived out the remainder of his life in an aviary in the Capitol building. In 1881, a fire broke out in a paint and solvent storage area near “Old Abe’s” aviary. A month later the famous Wisconsin War Eagle, weakened by fumes, died in the arms of his handler, George Gilles.

Many newspapers and Veterans groups wondered aloud “what would become of this famous, flesh and blood war relic?” Upon his death, “Old Abe” was preserved and exhibited in the Capitol building’s Grand Army of the Republic Memorial Hall until a fire destroyed the display in 1904. Sadly, only a few of “Old Abe’s” feathers survive, carefully preserved by the Wisconsin Veterans’ Museum in Madison.

Today, large sculptures of “Old Abe” stand atop the Wisconsin monument at Vicksburg, Miss., and atop the entrance to old Camp Randall, now the main entrance to the University of Wisconsin’s football stadium. Since 1865, Wisconsin-based J.I. Case farm implement company has used “Old Abe” as part of their corporate logo. “Old Abe” also serves as the mascot of several Wisconsin high schools.

Since 1921, “Old Abe’s” head, in profile, has served as the shoulder sleeve insignia of the 101st Airborne Division (Air Assault). A large-scale diorama of the 8th Wisconsin’s Color Guard, complete with “Old Abe,” is on exhibit in the atrium of the division headquarters building on Fort Campbell.

See an Eagle, an Owl, an even a Turkey Vulture up close and personal
January 12, 2017