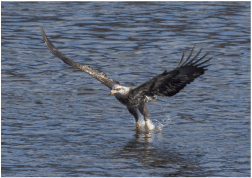 Hello all you fine Roost Counters:

Today we counted 93 eagles with the efforts of 36 hours of people out counting throughout the Lower Wisconsin River environs (Table 1).  This total is 11 eagles fewer than two weeks ago.

As with the first count, most of our eagles used either the Ferry Bluff Roost or Lone Rock Roost which is well down river (Figure 1).  Sugarloaf Roost, however, had 13 birds using it during our second count, whereas few birds roosted there two weeks ago.  The temperature at nightfall was also warm again which probably lead to undercounting birds, missing eagles that remained in the river valley for the night rather than flying to more traditional roosts where counters were located.

Interestingly, amount of use by eagles within one year does not help us distinguish a traditional roost from a temporary one, as all the temporary roosts mentioned above had, at one time or another, over 20 eagles using the roost during at least one count.

Our collective efforts this year will help us to understand night-time eagle use at the dam.  Besides being interesting to see what happens as the numbers of eagles that winter in the greater Sauk Prairie Area grow, data from the dam will be important is assessing impact to eagles from the Great Sauk Trail being planned.  This trail will follow the current rail line that goes through Sauk City and Prairie du Sac.  One question that FBEC needs to determine is how to assess the impact of winter and summer human use on this trail once it is constructed, and how we might guide development.